Today is world neuroendocrine tumour (NET) day and staff in the department are planning to raise awareness of the condition.

There will be NET unit stand in the hospital where staff will provide information about this type of cancer. 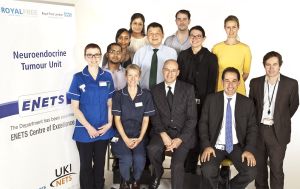 The Royal Free Hospital’s NET unit has an international reputation. The charity, the NET Patient Foundation, recently produced a video featuring an interview with Professor Martyn Caplin, the clinical lead of the unit.

In 2010 the unit became the first UK centre to be named a European centre of excellence by the European Neuroendocrine Tumour Society, following an independent review and audit.

The Royal Free Hospital's NET unit currently receives more than 20 new referrals per month (more than 240 per year) and has an active patient cohort of over 1,800, making it one of the largest centres in the world. It  receives referrals from the UK and abroad, and is the designated centre for NETs within the North London Cancer Network. Additionally, the NET unit is recognised internationally for its cutting edge research programme, ranging from genomic profiling (which examines why some people get a disease and others do not) to clinical trials of new drugs.

Philippa Davies, the lead nurse for the NET unit, said: “Today is about raising awareness of NETs. It’s important because these patients often feel isolated due to a lack of knowledge related to this rare and complex disease. Many patients experience a lengthy diagnosis pathway, and raised awareness of this condition will help reduce this and improve patient’s quality of life and survival”.

A video guide to NETs has been produced by the NET Patient Foundation. The guide feauters interviews with experts, including Professor Caplin, and patients.