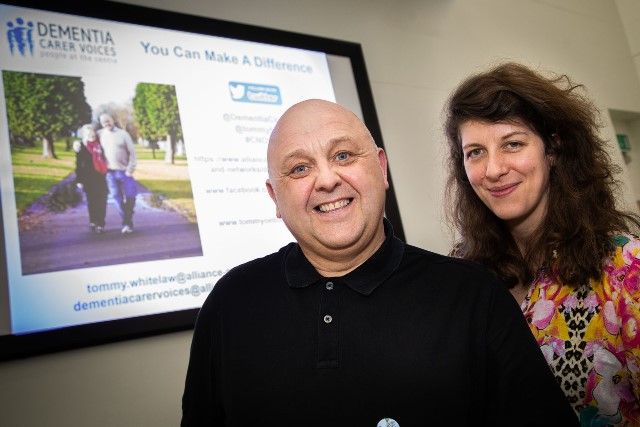 Staff at the Royal Free Hospital were treated to an emotional talk by campaigner Tommy Whitelaw who told them never to forget their patients were people – not just a person with dementia.

Tommy shared his experiences of being a full-time carer for five years for his mum, Joan, who had vascular dementia and who passed away in 2012.

Tommy shared with staff his and his mum’s devastating feelings of isolation and fear as the dementia progressed and people stopped dropping by or visiting for a cup of tea. But he also celebrated the work of the NHS. He told staff: “You are part of the most important, useful and beautiful profession.”

Tommy urged staff not to turn a blind eye to colleagues who were not providing care which they would expect for them or their families – explaining that ‘the standard we walk past each day is the standard we accept’ and told them they could all make a difference.

He left staff with a clear message: that they had the power to transform the lives of the people they care for and the colleagues they work beside.

By the end of the hour long talk there was barely a dry eye in the house and staff were reminded just how important their support and kindness is to so many families.

Tommy concluded: “Celebrate each other, support each other, respect each other. You matter, be kind to you and then think of others."

Tommy gave four talks at the Royal Free Hospital over the day which took his total up to 897 – he has spoken in hospitals, schools and care homes. He has also travelled around the country listening and gathering people’s experiences of caring for people with dementia.