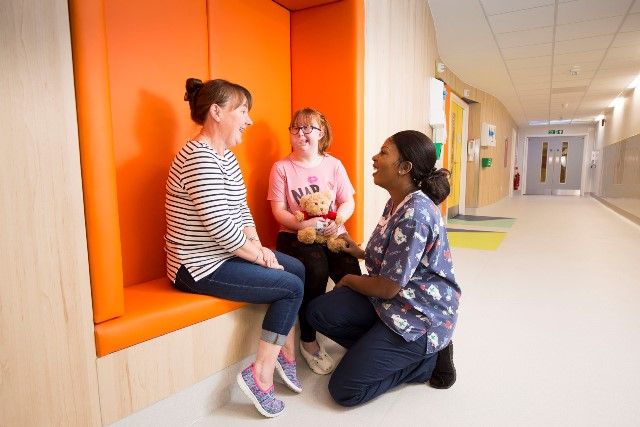 The children’s ward at the Royal Free Hospital has literally reached for the skies when it comes to brightening up the lives of some of our youngest visitors with a total refurbishment.

There are now back-lit panels with blue skies and fluffy white clouds dotted around the ceiling of the ward, which has a bright and light feel.

The fresh modern look has gone down well with staff and patients who are enjoying their new environment.

Ade Adamolekun, paediatric matron, said: “Yes we’re in hospital but now it’s as colourful and welcoming as possible with lots of creative touches.”

The entire ward had to move to a new location in the hospital while the refurbishment took place over the last six months, but staff were back in their previous location for Christmas.

As well as looking good the ward has also upgraded its technology including an up to date call bell system. This enables patients to alert nurses without disturbing other patients and visitors.

Ade adds: “We are also about to have a system introduced so our patients can request something such as a glass of water without us having to come and find out what they want and then go and get it for them. Now we will be able to just listen to what they want and immediately get them what they need.”

Other new touches include plastic display boards by the beds so that children can display their art-work but also then take it home.  Curved corridor walls, a feedback board, splashes of colour and art work featuring children at play all give the space a less sombre feel.

Katelyn Hutchison, 16, (pictured with her mother Lynn and a nurse), from Northern Ireland, has been staying at the Royal Free Hospital while she undergoes facial reconstruction surgery.

Her mother Lynn said: “We’ve been at the Royal Free twice before with Katelyn’s treatment but this is a complete change, more modern and just a nicer environment. There’s no place like home though and Katelyn is missing her dog so don’t worry we won’t be staying much longer!”

One resident who isn’t going anywhere is Gary, the ward’s resident fish, who has a fish tank all to himself.

Ade says: “Colleagues tell me he’s been on the ward for about 10 years and despite all the upheaval he seems to have adjusted well to the move!”