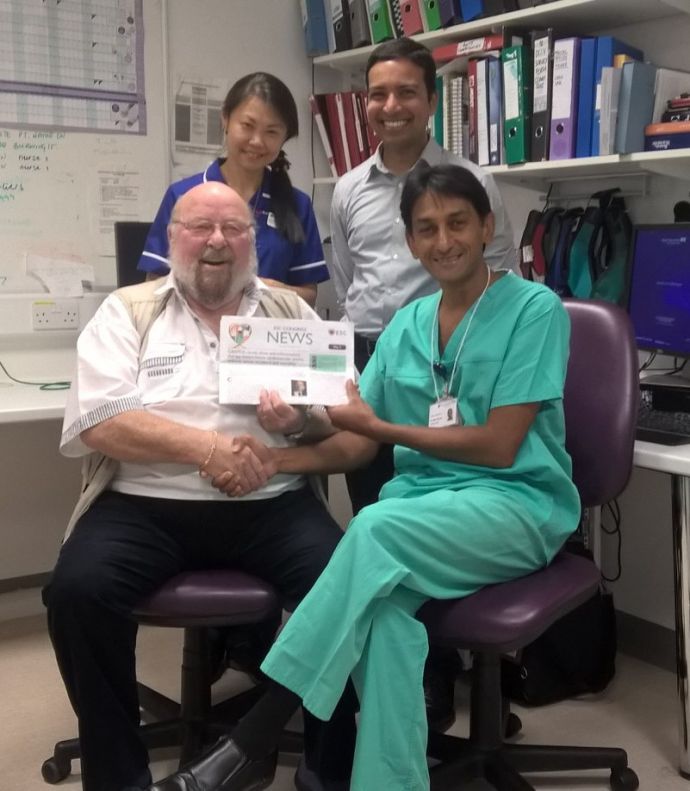 Six patients at the Royal Free London NHS Foundation Trust have taken part in the ground-breaking CANTOS study which has proven that anti-inflammatory injections could lower the risk of heart attacks and may slow the progression of cancer.

Heart attack survivors given injections of a targeted anti-inflammatory antibody called canakinumabhad fewer attacks in the future, scientists found. Unexpectedly, cancer deaths were also halved in those treated with the drug, which is normally used only for rare inflammatory conditions.

Dr Ameet Bakhai, consultant cardiologist and the trial principal investigator at the Royal Free said the trust was chosen along with five other centres in the UK for the trial and six patients were recruited locally to the study, which spanned 39 countries.

“We were chosen by Novartis to take part as our cardiac research team, Sister Lai Lim, Mr Vinodh Krishnamurthy, Dr Manoj Makharia and colleagues have a strong track record in cardiovascular research and because we are one of the leading research centres in the country,” said Dr Bakhai.

Worldwide researchers enrolled more than 10,000 patients who had had a heart attack and had a positive blood test for inflammation into the CANTOS trial.  All patients received high doses of statins as well as either canakinumab or a placebo, both administered by injection every three months. The trial lasted for four years.

For patients who received the canakinumab injections the team reported a 15% reduction in the risk of a cardiovascular event, including fatal and non-fatal heart attacks and strokes. Also, the need for expensive interventional procedures, such as bypass surgery and inserting stents, was cut by more than 30%. There was no overall significant difference in death rates alone between patients on canakinumab and those given placebo injections, and the drug did not change cholesterol levels.

Dr Bakhai said: “Although we don’t know whether our patients were receiving the canakinumab injections or a placebo what we do know is that none of our patients needed to be admitted to hospital since joining the study.”

One of the Royal Free London patients who took part in the study is Allan Schofield, 77, from Barnet, who suffered a heart attack in 2006. Initially the study involved controlled rehabilitation and exercise and this was followed by prescribed medication and injections of varying strengths and frequency delivered by the cardiology team at Barnet Hospital.

Allan said: “After my heart attack I quit smoking , I’d been a heavy smoker on 30-40 a day,  and I cut back on my drinking to the extent that I’m almost teetotal now and I also try to do as much walking as possible. I took part in a previous study and it’s been a privilege to take part in the Cantos study and I’m excited the results have been so excellent.

“There were two main reasons for taking part. Firstly it’s a pleasure to give something back to the medical profession after the care and understanding I received during and after my heart attack. “Secondly, I felt it was important to help if I could, rather than languishing on the sidelines and potentially reaping the rewards from other participants.”

Allan is now keen to reach a certain milestone. “My ultimate aim is to keep as fit as humanly possible and simply wait for my official card, text or telegram from whoever is king in 2040!”

Currently statins are the mainstay drugs for heart attack prevention and work primarily by lowering cholesterol levels. But a quarter of people who have one heart attack will suffer another within five years despite taking statins regularly. It is believed this is because of unchecked inflammation within the heart’s arteries. The research team wanted to test whether targeting the inflammation with a potent anti-inflammatory agent would provide an extra benefit over statin treatment.

Dr Bakhai said the study had far reaching implications and the next stage was to develop a viable way of delivering treatment to people identified as being at high risk due to inflammation as the drug is costly.  He also pointed out that the drug would be pertinent to reducing cerebrovascular disease (strokes) as well as cardiac disease because of its ability to stabilise fatty plaques anywhere in the body’s arteries.

“From the age of 18 all of us in the West build up some plaque lesions in the arteries of our body. This is the first drug for people who have previously had a heart attack that is proven to reduce your risk of having another one by acting on the stability of the plaques in a large scale clinical study like this.”

There were some downsides to the treatment. The researchers reported an increase in the chances of dying from a severe infection of about one for every 1,000 people treated, although this was offset by an unexpected halving of cancer deaths across all cancer types. In particular, the odds of succumbing to lung cancer were cut by over 75%, for reasons the team do not yet understand. The researchers are planning further trials to investigate canakinumab’s potentially protective effect against cancer.

Photo: Patient, Allan Schofield with Dr Ameet Bakhai and other members of the cardiology research team celebrating the publication of the ground-breaking results from the CANTOS study.