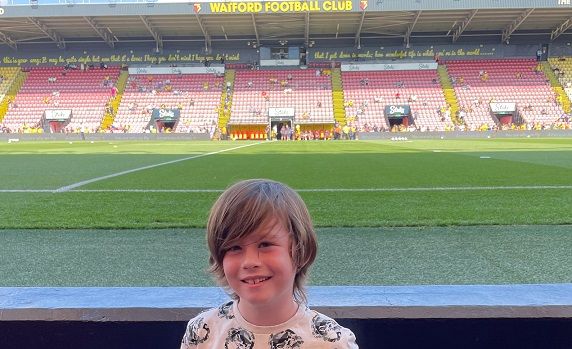 A seven-year-old boy has successfully completed 18 challenges to raise money for the two hospitals that treated him this summer following a brain tumour diagnosis.

To mark the 18 days between initial diagnosis of a tumour to receiving the all-clear from his surgical team, Sean Mulcrone and his family decided to take on 18 challenges.

The challenges included trying 18 different types of fruit and vegetables, reading 18 books, scoring 18 goals against his mum Colette and visiting 18 new places, the last of which was Watford Stadium - a massive treat for football fan Sean.

Sean and his family, who live in Bushey in Hertfordshire, have so far raised more than £2,400 for the two NHS charities that support the hospitals that cared for him, the Royal Free Charity and Great Ormond Street Hospital Charity.

Sean had a corrective procedure for a squint when he was younger but earlier this year Colette noticed the squint seemed to be coming back. The family GP referred Sean to the ophthalmology team at Edgware Community Hospital, part of the Royal Free London. At the same time, Sean started to complain of headaches. At his appointment, the examining consultant ophthalmologist said she was unhappy with the look of Sean’s optic nerve.

Scans showed that Sean had a very large brain tumour and would need surgery to remove it. Sean was admitted to the Galaxy children’s ward at Barnet Hospital in early July and was cared for there until neurosurgical specialists at Great Ormond Street Children’s Hospital could operate a few days later.

The operation went smoothly, with surgeons removing a 6cm x 5cm x 5cm tumour. Sean recovered well and was home just ten days after he attended Barnet Hospital A&E. Seven days later, the results of the tumour biopsy confirmed it was a grade 1 pilocytic astrocytoma, a benign slow-growing tumour that’s mostly found in children and young people. Sean will continue to have regular MRI scans over the next few years as there is a small chance of regrowth.

Sean’s mother, Colette, said: “Sean has been pretty remarkable, just so brave and stoic for a seven-year-old boy. He does get a bit claustrophobic but took the hour long MRI for his spine, pituitary gland and brain in his stride.

“When I told him there was something on the image his reply was, ‘Oh good, now the doctors know what it is they can fix it’. He was just really positive and I’m so grateful for the care that he received and I wanted us to do something to say thank you because without that expertise I would not have my son. I wanted us to do something for the hospitals that cared for him. It’s been amazing to see how much money has been raised and we’re very grateful to everyone who has donated.”

Sean’s favourite challenges were the board games and anything football related, including his visit to Watford FC and his least favourite were writing sentences. Sean is now enjoying being back at school and being able to play football again.