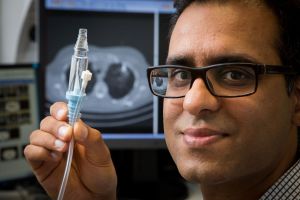 A team of radiologists and respiratory consultants who introduced a new more efficient lung biopsy method at Barnet Hospital have won the NHS Innovations Challenge Prize for cancer treatment.

The team’s innovative ambulatory lung biopsy service enables the vast majority of Royal Free London patients to be discharged just 30 minutes after their biopsy. The method also allows biopsy patients who suffer a collapsed lung to be treated at home as out-patients.

However, the relatively small number of Barnet Hospital patients that experience pneumothorax are treated with a small, compact device called the Heimlich valve chest drain (HVCD), instead of a traditional bulky chest drain. While the existing system would see those patients admitted for up to two days, the portable device allows them to leave hospital almost immediately and treat their collapsed lung themselves, safely and effectively at home.

While most hospitals of equivalent size expect to do around 40 biopsies each year, thanks to the new method Barnet Hospital expects to have performed around 300 between April 2015 and April 2016. Currently, Barnet Hospital is the only European hospital using the early discharge/out-patient HVCD method. However, NHS England is now looking into how it could be adopted by hospitals across the capital and the rest of the UK.

The team, which is led by Dr Sam Hare, consultant thoracic radiologist and radiology lead, has been named the winner of the NHS Innovation Challenge Prize in the ‘cancer care’ category.

The prizes seek to encourage, recognise and reward front line innovation and drive adoption of these innovations across the NHS. The prize includes £100,000 funding to support the project.

Dr Hare said: "It is a huge privilege to be honoured with this NHS Innovation award. This is an exciting opportunity to help shape a new and brighter landscape for lung cancer patients. The prize funding and support from NHS England will help us ensure that the ‘Barnet model’ becomes the norm throughout the UK, so that patients can be diagnosed more quickly and access the latest treatments."

Dr Dean Creer, a respiratory consultant at BH, said: “The method introduced by Dr Hare has led to a seismic change in my practice for patients with possible lung cancers. They are now able to have an early, definitive diagnosis which helps us make choices with more certainty and clarity.”