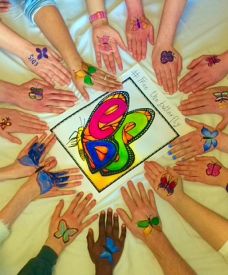 To mark Eating Disorders Awareness Week (22 to 28 February) a group of young patients at the Royal Free Hospital have started a Twitter campaign to encourage people to talk about eating disorders.

The teenagers, who are all being treated by the hospital’s eating disorder intensive service, decided to start the #FREEthebutterfly campaign in order to support those living with disorders and dispel common myths about the condition.

As part of the campaign, people are being encouraged to draw a butterfly on their hands and tweet a picture of it, along with the hashtag #FREEthebutterfly and their location.

They would like as many people as possible to get involved in the campaign and they are eager to see how far they can get the butterfly to travel. They hope people will tag their friends to encourage more people to take part and spread the message.

The patients said: “We felt that there was a lack of awareness about eating disorders and as a result of this we were being stigmatised.

“Through ‘freeing’ the butterfly, we hope to change people’s misconceptions and tell them the truth about eating disorders. By getting the butterfly to reach as many people as we can, we hope to spread the message as far as possible.

“We are currently patients of the eating disorder intensive service at the Royal Free Hospital and have first-hand experience of the great work that they do. The service provides a flexible approach to treating eating disorders and is very different to typical in-patient facilities which have higher relapse rates.”

Samantha Swinglehurst, lead nurse for the eating disorders unit at the Royal Free Hospital, who was awarded an MBE in the New Year’s Honours, said: "This is a brilliant campaign and a really creative way of removing some of the stigma associated with eating disorders - we are so pleased that our patients came up with this idea themselves. If we can encourage people to talk about this illness we will help families to spot it as early as possible.

"We are really proud of the unit here at the Royal Free Hospital - we aim to reduce the number of patients who need to be admitted to hospital by providing treatment in the community. If patients do not need to be admitted it means their recoveries can be much quicker and it means they can access the support of family and friends much more easily while they are recovering."