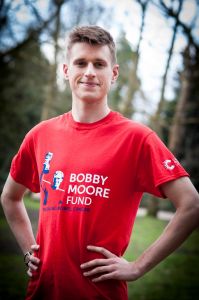 After many years watching the London Marathon, Dominic Baxter, oncology trials practitioner at the Royal Free Hospital, decided to enter and raise funds for a cause close to his heart. On 26 April Dominic lined up with the thousands of fundraisers taking part in the London Marathon – but this is not the only event he has entered. Dominic has the mammoth task of completing seven endurance events in one year.

Dominic said:  “I contacted Cancer Research UK and inquired about running the London Marathon on behalf of the Bobby Moore Fund for Bowel Cancer Research, a hugely important charity dedicated to the second most common cause of cancer death in the UK.

“After securing my place, it got me thinking about what else I could do in 2015 to make a real effort to raise as much money and awareness as possible for the Bobby Moore Fund. One event quickly became two, a marathon became an ultra-marathon and before long I’d found myself with a whole years’ worth of races and challenges to try and train for!”

On 7 March, Dominic took part in his first event, the Mudman off-road duathlon. Covering a total distance of 30km around Ministry of Defence training grounds in Surrey, the event consisted of a 7.5km run followed by a 15km cycle and finished with a second 7.5km run.

This was a tough challenge for his first event. “I was quietly confident I could manage the distances, but having not done any real training off-road I was a little concerned about how I’d handle the course. The ridiculously steep hills did a good job of spreading the group of around 200 people out, with everyone struggling on the up-hills and some being more confident than others when letting themselves fly down the equally steep and rocky down-hills.

“After 2 hours and 22 minutes of pain and exhaustion I managed to cross the line an official “MudMan”, with a few minutes spare to drag myself back onto the course to cheer my friend, who was also taking part, over the line.”

Dominic has now completed his second event, the London Marathon, as part of his Super7 below: 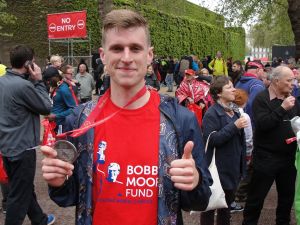 Dominic continues:  “The marathon through the streets of London was an incredible experience. It was a massive challenge both mentally and physically, but the huge crowds all along the course helped drag me over the finish line. My family, friends and a few colleagues from the Royal Free London came out to support me and I didn’t appreciate beforehand just how much seeing a familiar face in the crowd would help spur me on.

"I had such a sense of achievement crossing the line and would recommend the London Marathon to anybody at all, it was an amazing day.”

If you would like to support Dominic’s massive fundraising effort and for details on his training progress and other events, visit his DomsSuper7 blog. You can also donate via justgiving.com/Dominic-Baxter where all donations are hugely appreciated by Dom and his chosen charity.