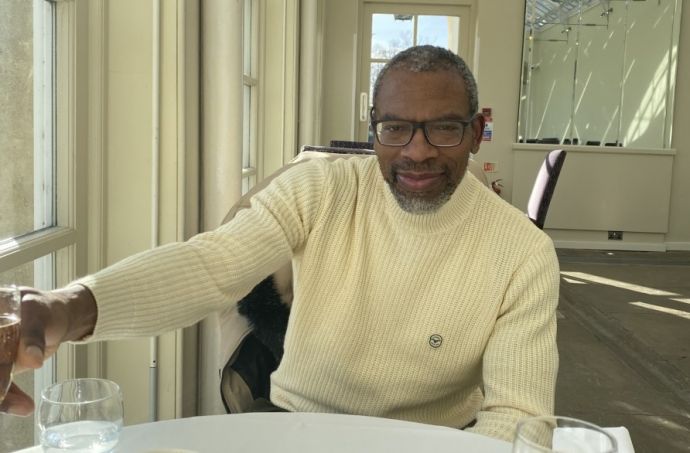 One of the first heart-failure patients to benefit from a pioneering gene-editing drug says the treatment has given him hope after he was faced with a bleak prognosis.

Married father-of-three Chidi Egbochue, 57, had suffered gradually worsening health until he was diagnosed with the condition in February and told he could have as little as two years to live.

The City lawyer, who lives in Crowbrough, East Sussex, with wife Samantha, 46, and their daughters Amarachi, six, and Nkechi, eight, and son Chinedu, 11, had worse news to come – his illness had been caused by a genetic disease called hereditary ATTR amyloidosis, meaning it was likely he had passed it on to at least one of his children.

However, having recently been put on a trial for the medication NTLA-2001, which corrects the faulty DNA that causes the problem with a single dose, Chidi now feels ‘optimistic’.

The experimental drug is based on Nobel Prize-winning genetic-engineering technology known as CRISPR, which allows sections of faulty DNA inside cells to be manipulated. Early-stage trial results show the treatment is highly effective in halting the illness in its tracks.

“The strong likelihood is that there will be no further damage to my heart,” Chidi said. “And there is a possibility, over time, that the existing damage will be reversed. I hope, in the future, if one of my children develop the condition, it will be simple to cure.”

Hereditary ATTR amyloidosis causes the liver to produce defective proteins that form clumps in the cardiac muscle, leading to heart failure. Unlike a heart attack, which happens when the blood supply to the heart is suddenly blocked, heart failure is a chronic condition in which the heart can no longer pump effectively because the muscle has become weakened. Symptoms include fatigue, breathlessness and swelling in the legs.

Chidi said: “I started out with a swollen ankle and then a swollen calf. Cellulitis or a blood clot was suspected but after a couple of trips to my GP I ended up in my local hospital where I underwent a battery of tests and an MRI, which ultimately resulted in receiving my diagnosis at the National Amyloidosis Centre, at the Royal Free Hospital.”

Initially Chidi had one round of standard treatment to manage the symptoms but was then offered the opportunity to take part in the trial which he was keen to do.

Chidi said: “I did my research so I feel confident but I’m also very conscious that it’s not just about me but the people and families, including potentially mine, who will come after me and that’s also a part of why I wanted to take part.

“I only had the dose a short while ago so it’s too soon for me to feel better but I do feel optimistic.”

There are roughly one million heart failure sufferers in the UK, with one in five adults expected to develop the condition. It is primarily caused by blocked arteries reducing blood flow to the heart, but up to one in 20 cases are believed to be caused by ATTR amyloidosis.

So far 12 patients, including Chidi, have been treated in the trial.

Although some patients are born with the genetic fault that causes ATTR amyloidosis, other people develop the mutation spontaneously as adults, meaning it can happen to anyone.

Professor Julian Gillmore, who runs the UCL Centre for Amyloidosis, National Amyloidosis Centre, Royal Free Hospital, said: “If this trial continues to be successful, the treatment may permit patients who are diagnosed early in the course of the disease to lead completely normal lives without the need for ongoing therapy.”