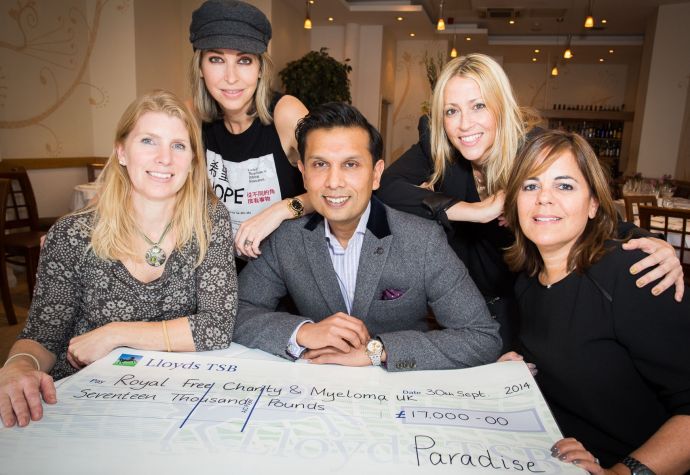 The Paradise restaurant in Hampstead celebrated its 45th anniversary by raising £17,000 to be shared between the Royal Free Charity and Myeloma UK, the bone marrow cancer charity.  In September the Indian restaurant, well known to locals, hosted a party to mark its milestone and to thank its customers for their patronage.

At the event, dinner and entertainment from professional Bollywood dancers and stilt walkers were followed by an auction.  Guests were able to bid for the right to have a table named after them and there were several reserve bids and a phone bid from New York.    The star auction item was the chance to work with Paradise’s chef to develop a signature dish named after the successful bidder.  This auction lot alone went for £4,000.

Wasel Ali, owner of the restaurant, said:  “We wanted to thank everyone who has supported us since my father started the restaurant in 1969 and decided to host an event to do something for charity.  We were not sure how it would turn out but the response was fantastic and it was a really fun evening.

“We have a long association with the Royal Free Hospital, including my son being born there, so we wanted them to benefit.  Our friends Nicole and Natalie Appleton from the pop group All Saints also have a relative living with myeloma which led us to support Myeloma UK as well.“

Chris Burghes, chief executive of the Royal Free Charity, said: “We wish to congratulate Paradise restaurant on their 45th anniversary and to thank their patrons for such generous bids which contributed to so much being raised. The Royal Free Charity supports all patients, including those being treated for myeloma and we will use these donations to help improve and save lives.”

Myeloma UK is the only organisation in the UK dealing exclusively with myeloma, a bone marrow cancer for which there is no cure, but many very effective treatments. The charity’s broad and innovative range of services cover every aspect of myeloma from providing information and support to improving standards of treatment and care through research and campaigning.

Judy Dewinter, Myeloma UK chairman and a Royal Free London governor, said: “None of our work would be possible without the generosity of our supporters.  We are hugely grateful to Wasel and his team and to all the guests who supported this fantastic event.”