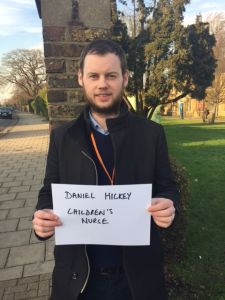 The Royal Free London NHS Foundation Trust is joining the ‘Hello my name is…’ campaign, a massive social media movement launched by a terminally ill doctor from the north of England.

The ‘Hello my name is…’ campaign was spearheaded by Dr Kate Granger, a young hospital consultant from Yorkshire who works in elderly care, to improve the patient experience not only here in the UK, but across the world. Kate became frustrated with the number of staff who failed to introduce themselves to her when she was in hospital. Her campaign on Twitter is inspiring nurses, doctors, therapists, receptionists, porters, domestics and staff in all roles.

Dr Granger, 33, has terminal cancer and has made it her mission to get as many members of NHS staff as possible pledging to introduce themselves to their patients.

The campaign is simple – reminding staff to go back to basics and introduce themselves to patients properly. Kate describes the campaign as “the first rung on the ladder to providing compassionate care” and sees it as the start of making a vital human connection, beginning a therapeutic relationship and building trust between patients and healthcare staff.

The campaign is being endorsed by an increasing number of well-known figures including David Cameron,  Jeremy Hunt, the Countess of Wessex, Bob Geldof and Drew Barrymore.

Deborah Sanders, director of nursing at the Royal Free London, said: “We are delighted to support this campaign, which highlights what is important to us at the Royal Free London. The campaign reflects our trust values and how we feel we should interact with our patients and with each other. It shows how the smallest things can make the biggest difference to patients.

"We are reminding staff to ask patients how they wish to be addressed and to tell their patient’s their names, while ensuring their name badges are visible at all times.”

The Royal Free London have joined forces with more than 80 NHS organisations that have pledged to launch or boost their own ‘Hello my name is…’ collectively on 2 February. The Royal Free London alone has 10,000 staff working with around 1.6 million patients each year. That’s how many lives can be impacted by this as it spreads. The collective launch will boost the national campaign around compassionate care considerably, with 400,000+ staff potentially involved.

The Mid Yorkshire Hospitals, where Kate is now working, are part of this network and their own launch of ‘Hello my name is…’ is central to this collective effort.

You can support Dr Granger’s campaign on Twitter by tweeting the hashtag #hellomynameis followed by your name, job title and where you work. To find about more about the campaign, visit www.hellomynameis.org.uk/home or follow Kate on Twitter at @GrangerKate.