A descendant of William Marsden, the doctor who founded the Royal Free Hospital 187 years ago, has officially opened a new installation which celebrates the extraordinary history of the trust. 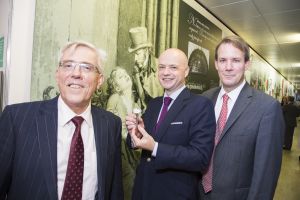 The history wall, which charts milestones in the life of the Royal Free, was opened by James Sandwith who brought along the key for the building in Gray’s Inn Road which was the Royal Free’s original home.

The Royal Free has always provided healthcare free of charge and so is a precursor to the NHS, founded 120 years later.

Dominic Dodd, the chairman of the trust, said: “It’s fair to say that Marsden would be amazed at the breadth and scale of services offered by the Royal Free today.  The original hospital treated 900 patients a year – we are likely to treat more than 1.5million this year.

“What he would recognise, though – which you can read more about in this display – is the pioneering spirit shown by many Royal Free clinicians in their efforts to do the best for their patients, whether through research, clinical care or the teaching of the clinicians of tomorrow.”

The history wall, which was funded by the Royal Free Charity, is located on the ground floor of the Royal Free Hospital and includes information on the treatment of infectious diseases, the training of women medics, the trust’s pioneering liver and kidney care and research carried out by our doctors.

More photos of the history wall can be found in our gallery.