Two doctors who helped set up the Royal Free Hospital’s kidney transplant programme in the 1960s have talked about the challenges they faced treating patients with kidney failure more than half a century ago. 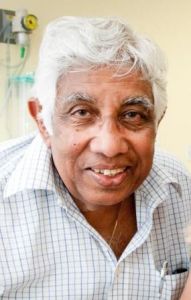 Patients receiving a transplant now can be confident that their operation will be successful. But when the first transplants at the Royal Free Hospital were carried out in the 1950s and 60s, things were much more difficult.

Ossie Fernando was a surgeon who started at the Royal Free Hospital in 1968 under the guidance of the trust’s first transplant surgeon, John Hopewell.

Ossie said: “When I first started John Hopewell told me my job was to go and find kidneys. In those days the patients weren’t on respirators, so we didn’t have much time to collect the organs before they deteriorated. The local hospitals called me if someone had died who might be able to donate a kidney. The police were on alert and would blue-light me there and back. We had only about three hours to get the organ back to the Royal Free in those days. Now we have much more sophisticated ways of preserving the kidney so we have about 24 hours to get the kidney to the recipient.

“I had to speak to the families of the patients who had died to ask for their consent. Now there are specialist nurses who do that. It wasn’t easy, however, most of the time they agreed. I had to perform the operation to remove the kidney myself; if I was lucky one of the nurses might be on hand to help out.”

Ossie added: “I would collect the kidney in a picnic cooler box and I had to go around the hospital searching for ice to pack it with. The immune-suppression drugs were primitive in those days and we used to keep the patients in isolation for two weeks after the kidney transplant as we were worried about them getting an infection. Now they don’t need to stay in isolation at all and the drugs are much less toxic.”

Professor John Moorhead was the Royal Free Hospital’s first nephrologist and he helped establish the hospital as a leading centre for treating kidney conditions.

He said: “It was tremendously exciting to lead such a team right at the beginning of modern nephrology and kidney transplantation. The US had led the way but we weren’t far behind them and we felt the whole of the kidney field was opening up. It could be pretty hairy at times but new technology was quickly developed along with discoveries about how the kidneys worked. We had not known that the kidneys had a major role in maintaining blood pressure or how the erythropoietin (EP) they made was essential for making red blood cells. So we were living in very exciting times. The hospital was very good at supporting us and allowing us to do the work that we wanted to do.”

At the Royal Free Dr Zac Varghese was improving tissue typing techniques and other forms of matching, plus the success of the Royal Free’s dialysis unit, which was set up by Dr Rosemaire Baillod, paved the way for the kidney transplant programme to get up and running.

John said: “In 1968 we made a lot of effort to ensure that the first transplant of the new program performed by John Hopewell and Ossie Fernando would be successful. The fact that it worked straight away felt like a TV rocket launch. That 1968 kidney lasted several years and was hugely encouraging to everyone.”

Organ donation week runs from 5-11 September. If you would like to join the organ donor register visit www.organdonation.nhs.uk or call 0300 123 23 23. Share your decision with your friends, using the hashtag #YesIDonate.