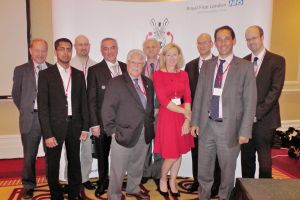 Early in September, the first international symposium on carcinoid heart disease, organised by the Royal Free London NHS Foundation Trust, set the stage for international guidelines for the management of this disease.

The event showcased the work at the Royal Free Hospital. The hospital has the largest valvular heart disease and carcinoid heart disease clinic in Europe which in conjunction with the hospital’s neuroendocrine tumour (NET) unit is a European Centre of Excellence .

Carcinoid heart disease (CHD) develops in patients with specific types of cancerous neuroendocrine tumours, known as carcinoid tumours.  If these tumours spread to the liver, substances they secrete can affect the heart, leading to damaged valves, usually on the right side of the heart. This has a significant impact on a patient’s chances of survival.  A patient with a carcinoid tumour usually has a relatively long survival rate but if CHD develops this, rather than the tumour, becomes the cause of death.

Carmen Mollinson is among the patients looked after in the NET unit at the Royal Free Hospital.

In 2008 her GP did not know what was wrong when she complained of being unable to keep down any of her food.  At her lowest point she was going to the toilet 18 times a day.  She had many tests but nothing was found.  Meanwhile she was losing a lot of weight and getting weaker.

When she was referred to the Royal Free by her GP she weighed only five stone and had no energy at all. She spent two weeks as an in-patient and extensive tests were carried out. When neuroendocrine cancer was detected doctors could see that her heart was already seriously affected.  Open heart surgery was arranged at Harefield Hospital and two of her valves were replaced. Since then her disease has been managed by the Royal Free Hospital. She has injections every three weeks at her GP to keep her tumours stable and comes back to the hospital every six months to review the tumours and her heart condition.

Though living with an incurable cancer, Carmen’s energy levels and quality of life are much improved. She is able to enjoy gentle activities with her children and grandchild.

“The people at the Royal Free are diamonds,” says Carmen. “I wouldn’t be here to today if it was not for them.”

Research carried out at the Royal Free London has been instrumental in establishing international guidelines for the management of the disease. Guidelines include using a biomarker called NT proBNP for screening patients for CHD which has been shown to be cost effective compared with investigation using echocardiography. The guidelines also propose using strong treatment to control the secretions to the heart from the NETs. Research suggests that attacking the tumours in this way slows the development and spreading of the disease.  The meeting also featured potential new ways of treating CHD such as non-surgical methods to replace heart valves.

The Royal Free’s NET unit led by Professor Martyn Caplin supported by Dr Christos Toumpanakis , was the first UK centre to be made a European Centre of Excellence for NET. The valvular heart disease and carcinoid heart disease unit is led by Dr Joseph Davar.

Dr Joseph Davar said: “Carcinoid heart disease is a complex pathology which leads to significant deterioration of outlook if not dealt with in an appropriate and timely way.  Over many years the Royal Free Hospital has created strong links between our two units to look after patients with these multifaceted problems.

“This first international symposium was organised by Royal Free Hospital consultants and attracted leading specialists in the field. Cardiologists, neuroendocrine tumour specialists and cardiac surgeons from such institutions as the Mayo Clinic, Mount Sinai Hospital, Charite and others shared best practices to further advance research in the field and to work together to improve the health of our patients."