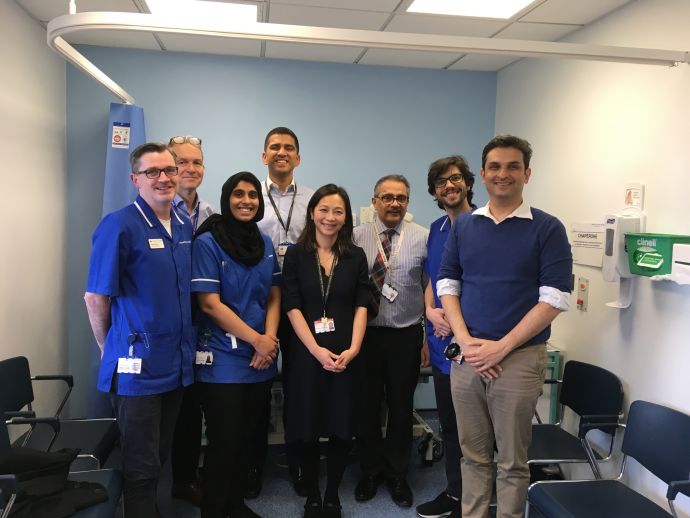 A new improved kidney cancer service at the Royal Free London (RFL) is helping many of our patients avoid unnecessary surgery – and those who do have surgery are recovering more quickly.

The routine use of a specialist type of biopsy means that doctors are more easily able to identify patients who do not need surgery because their tumours are benign. Patients like Rafael Gonzales (read more below) are able to go home sooner because of a new enhanced recovery programme.

The specialist centre for kidney cancer at the RFL is the largest of its kind in Britain, providing highly specialised services for patients from across north and north east London and west Essex.

A renal mass biopsy involves extracting a sample of the kidney tissue with a needle guided by imaging. The sample is then analysed in the pathology lab to determine whether cancer is present. These biopsies are recommended as a test for growths in the kidney that are 4cm or smaller.

Ravi Barod, consultant urological surgeon, explained: “We previously diagnosed kidney cancer in patients with CT scans and we knew that 20% of the growths we removed were benign.

“We are the only kidney cancer centre in the UK to have standardised the routine use of renal mass biopsy. In the past three years we have carried out more than 650 biopsies for small renal masses.

“Of these, 130 were shown to be benign and virtually all of these patients avoided having surgery or ablation and are being followed up under surveillance. If the patient has a benign growth and wants it removed, they have that option, but most do not want surgery and opt for surveillance.

“This means they are not having unnecessary treatment and a hospital stay, with possible associated complications.”

In a further improvement in care, the renal team are helping to get patients home more quickly after their operations, with a new enhanced recovery after surgery (ERAS) programme.

The programme ensures that patients are better prepared before their surgery, and helped to recover more quickly after it.

Pre-operative assessments have been improved to ensure patients are fit for surgery, that all their medication is monitored and they have been seen by the anaesthetist. They are also seen by a specialist nurse who explains the operation and what the patient can expect afterwards.

Mr Barod says: “This is an important part of recovery. If patients understand what may happen – for example that they are likely to feel unwell for the first 12-24 hours after their operation, they are less likely to be worried and feel worse as a result.”

Ward staff assist patients to sit out of bed, do breathing exercises and move around as soon as possible after surgery to reduce the risk of chest infections and blood clots, and recover strength.

ERAS has reduced the average patient stay after nephrectomy – surgical removal of the kidney, or part of it – from four days to two.

Mr Barod said: “We have achieved this without an increase in complications or readmissions. There is evidence to show that reducing length of stay in hospital is better for patient safety and recovery. A further benefit for people with kidney cancer is that we can now carry out twice the number of operations with the same number of beds.”

It was a bolt from the blue for Rafael Gonzales when he was diagnosed with kidney cancer at the age of 39.

He recalls: “I went to bed with an awful pain in my side. I’d noticed blood in my pee that night and by the morning the pain hadn’t gone away.”

Rafael went to A&E and a series of scans revealed that he had two large tumours, one on each kidney.

Ravi Barod, consultant urological surgeon, explained that it was likely he would have to remove the whole of Rafael’s left kidney owing to the size of the tumour. The tumour on his right kidney, although smaller, was still very large and the surgeon wasn’t sure how much of the normal kidney he could save.

Mr Barod had completed training in robotic surgery and an ice-cooling technique that allows him to perform lengthy robotic surgery on large and complex kidney tumours while preserving as much normal tissue as possible. The training was funded by donors to The Urology Foundation (TUF) and Mr Barod applied this expertise to operate on Rafael.

Robotic surgery uses instruments with greater agility than the human hand and requires smaller incisions, which means patients can go home more promptly afterwards, in less pain, to recover far sooner than if they had undergone open surgery.

Rafael had one operation in April last year and a second one in August. He was able to go home after just two nights following both operations.

Mr Barod and his team were able to completely remove both tumours and preserve the normal part of each kidney. Without their highly specialist expertise in robotic surgery Rafael would have required open surgery.

Mr Barod said: “If he had his surgery elsewhere, he would have almost certainly lost his entire left kidney and had dramatically reduced kidney function for the rest of his life. He would have faced a much longer period of recovery and a higher chance of complications afterwards.”

Rafael added: “At the end of this process, incredibly, I have one and a quarter kidneys left. I’m now free of cancer and perfectly fine.

“Ravi is a really nice guy. He was always very straight with me and didn’t try to provide me with more hope than was realistic and I really appreciated that. He always explained what was going to happen so clearly.

“Thanks to Ravi and his team, I’m now back doing the things I love.”

Further recent successes for the RFL kidney cancer centre include:

More notable milestones and achievements at the specialist centre for kidney cancer at RFL: