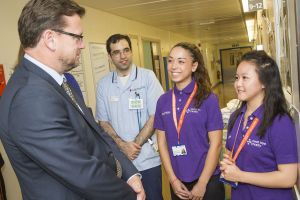 The programme is funded by the Department of Health through the Helping in Hospitals scheme, with money allocated by innovation charity Nesta. It was launched in May of this year and is supported by the Royal Free Charity and Step Up To Serve, a national campaign that aims to make social action a part of life for 10 to 20 year olds. It has already attracted 63 hospital volunteers who support patients, staff and visitors as “satnav guides”, helping people find their way around the site and assisting patients as lunch and dinner friends.

The minister also visited 7 East A, one of the hospital wards benefitting from the programme and which has made particularly good use of young volunteers, and took part in a roundtable discussion with the volunteers, who questioned the minster on national responses to dementia, supporting NHS staff and being a better citizen through positive social action.

Minister for civil society Rob Wilson said: "This government is committed to giving young people the opportunity to volunteer and play a real part in their community. The Helping in Hospitals programme is doing just that, enabling young people to contribute their skills and time through social action, helping to create a bigger, stronger society."

Royal Free Charity chief executive Chris Burghes said: “The charity is really excited by this new initiative we have introduced. To have so many young people volunteer, in such a short space of time, shows the enthusiasm and passion they have to help patients and make their stay in hospital that little bit better.

"Schemes such as this allow both charities and individuals to improve, but just as importantly bring real benefit to society.”