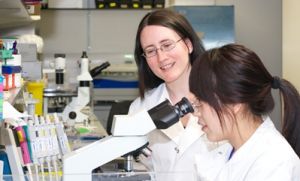 Researchers at the Institute of Immunity and Transplantation at the Royal Free Hospital have made an important discovery about what causes type 1 diabetes.

Following six years of research, Professor Lucy Walker and her team have found that a particular kind of immune cell called a follicular helper T cell is responsible for triggering an immune response in the body which leads to the destruction of insulin-producing cells in the pancreas.

This new research, published in the Journal of Clinical Investigation, means that an effective treatment for type 1 diabetes could be developed more easily.

Type 1 diabetes is an auto-immune disease, which means that it is caused by the body’s own immune system. Because insulin-producing cells in the pancreas are destroyed by the immune system the body cannot produce any insulin, which is a hormone that controls glucose levels in the blood and enables the body to use glucose as energy.

There is currently no cure for type 1 diabetes and patients with this condition are required to inject insulin whenever they eat in order to control their blood glucose levels. There are currently almost 400,000 people in the UK with type 1 diabetes, including 29,000 children.

Although scientists have known for some time that T cells cause diabetes, this is the first time the particular type of T cell has been identified.

However, Professor Walker said there is still a long way to go before a cure for type 1 diabetes is developed because it is still unclear why these T cells cause insulin-producing cells to be destroyed.

“This is an important discovery,” she said. “Now we know that it is these T cells which set off a chain of reactions, leading to the destruction of insulin-producing cells. It means we are one step closer to developing an effective cure for type 1 diabetes.

“However, everybody has these T cells and we still do not know why they expand in some people to cause diabetes while in other people they do not.”

The work was performed in collaboration with the clinical diabetes team headed by Dr Miranda Rosenthal. Dr Rosenthal said: “Type 1 diabetes is a growing problem in the UK and research that helps us understand how it develops will ultimately lead to better treatments for our patients.”

The research was funded by the Medical Research Council, the Juvenile Diabetes Research Foundation and Diabetes UK.

Image: Professor Lucy Walker (left) with a member of her team, Chunjing Wang.