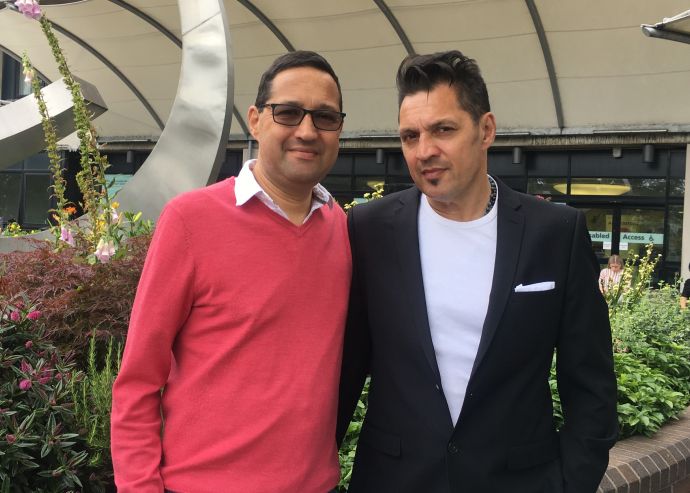 Two brothers treated at the Royal Free Hospital have said their lives have been turned around by a ‘miracle’ drug which has been given funding approval for NHS patients in England this week.

Vincent Nicholas and his brother Neil both have the condition hereditary transthyretin (hATTR) amyloidosis.

Patients with this condition produce an abnormal protein which accumulates predominantly in the heart and nerves. This triggers a range of symptoms including numbness in the hands and feet, persistent diarrhoea, loss of control of bowel and bladder function, progressive immobility and eventually death.

Previously, the treatment options had a limited effect on both the symptoms and the progression of the disease.

But now a new drug, patisiran, which was trialled at the Royal Free Hospital’s National Amyloidosis Centre (NAC), could transform the lives of patients with hATTR by blocking the production of the abnormal protein.

Neil, 56, from west London, was diagnosed with hATTR in 2016. He has been on the drug for 18 months and it has made an enormous difference to his life.

A professional actor and musician, Neil started to feel numbness in his hands and legs after his diagnosis, which meant he couldn’t play the guitar and the saxophone and it also affected his ability to sing.

“This drug has made a huge difference,” he said. “My symptoms were getting worse and worse and I wasn’t able to work – playing and singing was becoming more difficult. Before I took the drug I hadn’t cycled for four years. Now I’m back on my bike every other day and I’ve got my singing voice back and I can play the guitar and saxophone. I am seeing the benefits more and more – it’s been brilliant.”

Vincent, 59, from Salisbury, has only been on the drug for the past six months so he has some time to go before he feels the full effect but he has already seen a marked improvement in his symptoms such as numbness in his limbs and an improvement in his blood pressure.

“This is momentous,” he said. “It’s turned this illness from something that it is terminal to something that is treatable. I can now see a future for myself. I am just hoping that it will stabilise me and stop me getting worse - and it is achieving that so far.”

Patisiran works by ‘silencing’ or blocking the gene that produces this damaging protein. During a clinical trial carried out at the NAC, patisiran was shown to halt or even improve the debilitating symptoms of hATTR in the majority of patients. It has now been approved by the National Institute of Health and Care Excellence (NICE), which means it is available to all NHS patients in England.

Professor Julian Gillmore, the lead for hATTR amyloidosis at Royal Free Hospital, said: “This is an incredible drug, which can completely change what these patients experience. It is pretty close to a miracle. I have been an amyloidosis specialist for more than 20 years and this is the first time that I will be able to offer patients with hATTR amyloidosis a treatment that can stop the progression of this devastating disease.

“Previously, the few available drugs have had a limited effect and none so far have been able to halt disease progression. hATTR amyloidosis is an inherited condition, which means whole families might be affected by it. It really is exciting that we can now offer them an effective treatment.”