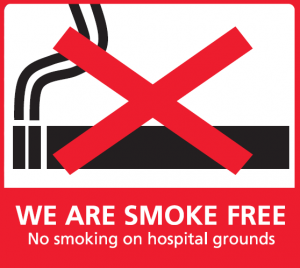 As smokers around the country are urged to stub out their last cigarette for national No Smoking Day, the Royal Free London is rolling out its campaign to create a smoke free environment across its three hospital sites.

Smoking is banned across all Royal Free London grounds, including entrances, car parks and other spaces.

Since October the Royal Free London has worked to ensure the area outside the Royal Free Hospital remains a clean and healthy place for patients, visitors and staff by putting up awareness posters highlighting the fact that smoking on our grounds impacts everyone.

This successful campaign has also seen security officers patrolling the main entrances and politely reminding people of our no smoking policy.

Now to coincide with National No Smoking Day on 11 March the Royal Free London will be extending its Smoke Free Royal Free campaign to Barnet Hospital and Chase Farm Hospital.

As anti-smoking posters go up at Barnet Hospital and Chase Farm Hospital, there will also be information stalls at all three hospital sites offering advice and support to smokers who want to kick the habit.

Throughout the day the Royal Free London will be sharing via Twitter the experiences of those who quit with the help of the trust. Staff and the public will also be invited to take part in a smoke free ‘tweet in’ during which our public health experts will answer your questions about giving up. The 'tweet-in' will take place between midday and 2pm.

Dr Alison Rodger, consultant and clinical director of public health at the Royal Free London, said: “The Royal Free London has a duty to protect all patients, staff and visitors from being exposed to second hand smoke and ensuring that we have a completely smoke free site is the best way of achieving that goal.

“Our smoke free policy is essential to creating a healthy pleasant environment for people who visit and work in our hospitals.

“With 100,000 people in the UK dying every year from smoking related diseases, we are also focussed on encouraging and supporting all those who pass through our hospitals to quit.”

Find out more about our smoking cessation service.