A patient who spent his 80th birthday party at the Royal Free Hospital after being admitted with heart problems has praised nurses and ward staff for throwing him a (gentle) surprise birthday party. 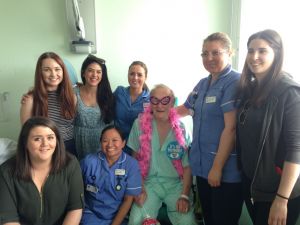 Terence Duggan said he was brought to tears last Monday when his team of nurses on ward 10 West gathered round to celebrate his big day.

The retired postman from Colindale said: “I only expected one or two to come in and wish me happy birthday. But there were decorations saying ‘happy birthday’ and ‘birthday boy’, and they made me a cake.

“Four of them weren’t even on duty; they came in at lunch time especially to see me. It made me cry a little bit. It was wonderful, a real surprise.”

He added: “The nurses here are always so welcoming. They are just themselves. They were my nurses when I needed them to be but they were also my friends.

“I have been coming to the Royal Free for a long time and you always see a smiling face.”

Teresa Carpe, staff nurse, said: “He told us it was his birthday and he was going to spend it in hospital, so we wanted to do something to cheer him up."