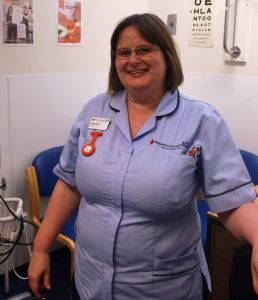 Debra Bassil, junior sister at the urgent care centre at Chase Farm Hospital, knew when she was a small child that she wanted to be a nurse. Even though she can't quite put her finger on what it was that attracted her to the profession at such a young age, she has never regretted her career choice.

“I've always enjoyed nursing and have never felt disillusioned,” she says. “I like that I am able to bring a level of solace to people. I've never been very career focused; what I like most is interacting with patients.”

Debra grew up in London and started her training as a nurse in 1980 at what is now University College London Hospital. She qualified in 1983, and the next year took up a post at the hospital’s A&E department where she worked for a number of years, including during the King’s Cross fire in 1987. She has specialised in emergency medicine ever since.

“My mum said I went into emergency medicine because I hated changing beds,” Debra jokes. “But I liked the variety of patients: children, teenagers, adults. People from all walks of life, particularly in central London.”

One thing that Debra believes differentiates emergency medicine from many other specialities is the tremendous pace at which nurses and other staff can be required to work. This can make it challenging to take the time to make patients feel welcomed and reassured, but it's nonetheless something she strongly feels is vital to nursing.

Debra stopped working full time in 1995 to care for her three children and started working bank shifts at Barnet A&E in 1996.

“I used to work nights – 9pm to 3am,” she explains, adding that it fitted in well with her family life. “The children didn't even know I'd left the house.” Even now Debra often works night shifts. “I enjoy nights. You can often get more of an insight into patients by talking to them during the night shift.”

For anyone who is considering a career in nursing, Debra’s main piece of advice is that people skills and compassion, as well as a sturdy pair of shoes, are vital. “You have to truly care about people. Even if you find it difficult to relate to them, you’ve got to be able to have empathy for them.”

“You take on this job and it has an importance for society and the people who use your service,” Debra says. She adds that she lives locally and is sometimes recognised by grateful patients or their relatives.

Having worked in emergency medicine for so many years, Debra has seen first-hand how things have changed over the past few decades. “It used to be very quiet in A&E at 3am,” she says, “but not now. Society has changed and people expect to be able to do what they want when they want. It’s all 24/7 and people don’t want to take the time off work.

“There’s also more technology around. We used to do urine tests with pipettes and tablets, but we now just put it through a machine!”

Debra recently moved from Barnet A&E to the urgent care centre at Chase Farm. It’s open seven days a week and can deal with most minor injuries and illnesses, including broken bones and minor burns and scalds.

“The requirements are the same as in A&E,” Debra explains, “but the workload isn’t as heavy. After so long in A&E I was almost burned out, but coming to the urgent care centre has reignited my passion as there are more opportunities to fully engage with patients.”

Something Debra has particularly enjoyed during her career has been seeing new nurses join the team and developing both professionally and personally. “I’ve seen staff come as students, grow, qualify, become peers and even superiors. It’s never bothered me, and it’s actually something I’ve taken great pride in.

“Nursing has multiple avenues. It’s a career that can take you anywhere.”