A Royal Free Hospital patient has completed a mammoth journey around the UK on his motorbike to raise money for kidney cancer research. 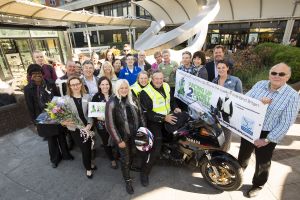 Jon Birchall, 55, from Hereford, spent an incredible 57 days on the road riding 7,500 miles around the British coast for his charitable appeal, Facing Up 2 Kidney Cancer. He has so far raised more than £25,000 for the research team at the Royal Free Hospital.

He started his trip in Blackpool in June, taking in Wales, Scotland and England finishing at the Royal Free Hospital on 30 September where he was welcomed by a crowd of well-wishers including senior medical staff.

Jon, who was diagnosed with kidney cancer in 2013, said: “It’s been an incredible four months. It’s been extremely hard work but I have had a wonderful time as well. I have also gone for five months without any tumour growth and if that’s the effect of riding a motorbike I’d better go round again.Thanks to all my supporters and thanks to my wife Sarah, who has been working seven days a week on this.  I couldn’t have done this without her.”

Michael Aitchison, the lead for kidney cancer at the Royal Free London, said: “This is an absolutely amazing achievement, so congratulations to Jon and to his wife Sarah. We want to create a world class centre for kidney cancer and we are very grateful to Jon and Sarah for all their efforts to raise money that will contribute to that.”

Jon wanted to raise awareness of kidney cancer in both the public and among the medical profession, working with the James Whale Fund For Kidney Cancer.

Image: Jon and Sarah Birchall are welcomed to the Royal Free Hospital by their supporters