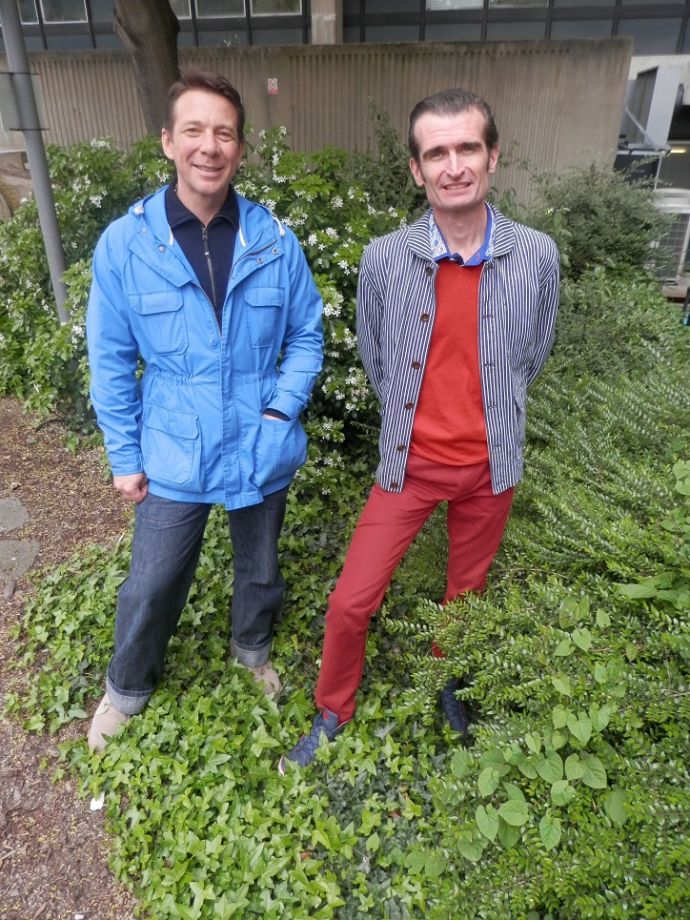 Simon Ling and Steven Dowson forged a lifelong friendship as students at Chelsea College of Arts. But the pair, who have known each other for almost 30 years, now share even more than a passion for art.

At the end of March Steven donated a kidney to Simon and the transplant operation was carried out with the help of a surgical robot at the Royal Free Hospital in London.

Simon, 48, who lives in Camden and is a painter whose work has been exhibited at Tate Britain, was diagnosed with IgA nephropathy ten years ago. This is a rare condition where an antibody lodges in the kidneys and results in inflammation that, over time, can stop the kidneys from filtering the waste from your blood. It is not known what causes it.

About five years ago Simon was warned that he may need a transplant in the future as his kidneys would eventually stop working.

Simon said: “I mentioned it to Steven and straight away his response was, ‘Why don’t I do it?’. I think I might have said something like ‘you’re mad!’ but he assured me he was interested.”

Preliminary tests were done to see if Steven, 47, an art teacher at South East Essex Sixth Form College, who lives in Leigh-on-Sea, could be a suitable match. The results were good but it wasn’t until around Christmas time at the end of last year, when blood tests showed Simon’s health had started deteriorating and he found himself lacking in energy, that the operation was planned, so he could avoid going on dialysis.

Simon says: “I’d actually heard about the robotic surgery, which was pioneered in the States, a few years ago and I think it’s incredibly cool that my surgery has been done in this way – it feels like science fiction made real.”

The operation took about four and-a-half hours and both men are doing well. Steven credits yoga and cycling with his swift recovery. Simon’s recuperation is understandably slower as the immunosuppressant medication he is taking, so his body doesn’t reject the new kidney, is adjusted. But he is walking a lot and feeling stronger every day.

When the pair were initially discharged from hospital Steven went to stay at Simon’s for a few days.

Steven said: “It was pretty funny as we were both hobbling about. Simon did most of the cooking and we just took it easy, slept a lot and watched a lot of TV.

“Two weeks later I was back home cycling and going back to general yoga classes and wasn’t taking pain killers. Work have been brilliant. They gave me the time off I needed and employed part time staff to cover my classes.

"It is a strange sensation. I do feel like there is an absence of something – a physical feeling of space.”

Simon said: “Similarly, I feel like I’ve got something extra. Sometimes I give it a little pat!”

Simon adds: “Steven is probably the most decent person that I know. I’m just incredibly grateful for what he’s done. I also want to say thank you for all the care I received at the Royal Free Hospital from the surgical team to everyone on the ward. All the staff were amazing and treated us with compassion and care. Their professionalism was extraordinary.”

Steven said: “Simon has always been there when I’ve needed help and I’m more than happy to be able to help him out so significantly in return. I think to make that much of a difference to somebody is a great opportunity.”

Neal Banga, the consultant transplant surgeon at the Royal Free Hospital, who carried out the transplant, said: “Robotic surgery is changing the face of surgery as it enables the surgeon to take on more complex cases and reduces recovery times. It’s fantastic to see Simon and Steven doing so well.”

Both friends agree they would like to see the current system changed so that people have to opt out of donating their organs on their death rather than the current opt-in system.

The Royal Free London attracts patients from across the country and beyond to its specialist services in liver, kidney and bone marrow transplantation, haemophilia, renal, HIV, infectious diseases, plastic surgery, immunology, vascular surgery, cardiology, amyloidosis and scleroderma and we are a member of the academic health science partnership UCL Partners.