To mark National Play in Hospital Week (28 September - 4 October), young patients and their parents have praised the Royal Free London’s “absolutely brilliant” play specialist team who work tirelessly to improve the experience of every paediatric patient staying at hospital. 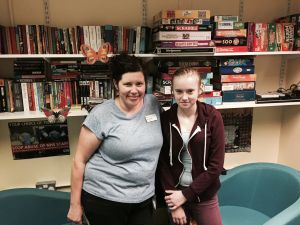 The trained team visits all patients staying on our children’s wards at least once a day. For those staying for extended periods, they also organise an activity plan.

Abbi Spurdle, play specialist at the Royal Free Hospital, said: “Children don’t always understand what is happening to them and parents tell you they don’t know how to explain, but you can do that through play. Some will come back from an operation and re-enact everything that has happened to them through play. It’s a way of letting them work through their emotions.”

Demi McInerney, 16, from West Hampstead has been coming to the hospital for around five years, while also attending the Royal Free Hospital Children’s School.

Demi, who has cystic fibrosis, said that throughout the years the play team had always been able to entertain her during her hospital stays. She said: “They are absolutely brilliant. If I’m in my hospital room and I’m bored I don’t even have to ask them, they just pop in and give me something age appropriate to do.”

After Aimee Kobrin’s son Aaron was born with Rubinstein-Taybi syndrome, a genetic disorder that can affect weight gain and growth, they were forced to remain at the RFH for five weeks. During this time she said that Abbi and the team were “like a lifeline”.

“Aaron was only five weeks old so he couldn’t play, but I gained a lot,” she said. “They were so thoughtful and so necessary. I have been in the hospital a lot since my son was born and I love that you see the same faces around. It’s amazing, like having a non-professional therapist.”