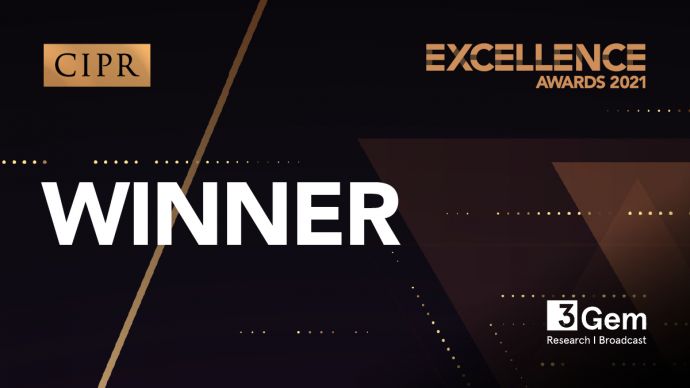 The Royal Free London communications team have received a prestigious national award for their work during the pandemic with judges describing their entry as ‘head and shoulders above the rest’.

The team was last night won the ‘Best COVID Response (Public Sector/Charity) at the annual CIPR (Chartered Institute of Public Relations) awards ceremony beating seven other finalists in the category.

The communications team has supported the RFL’s COVID-19 response, keeping staff up-to-date with key information, celebrating their successes and shining a light on the incredible work of colleagues throughout the pandemic. They worked closely with TV broadcasters from BBC News to Sky News and print media from The Times to the New York Times.

The team presented the story of the NHS to the nation, working alongside production company Label 1 to bring the work of the RFL into the homes of BBC viewers in the BAFTA-nominated documentary Hospital.

They kept patients and key stakeholders, including MPs, governors and members, updated about key issues and developments and used the trust’s social media platforms to highlight all of the incredible work of colleagues.

Judges described the entry as: “A powerful campaign, hard hitting at times, which saw the Royal Free London stand head and shoulders above the rest.”

They also praised the decision to let the Hospital documentary team film at the trust from the start of the first lockdown and to invite in other media as well.

They said: “To embrace PR in this way demonstrates the courage and bravery to invite the world in under such challenging and emotional circumstances …. The breadth and depth of the coverage shows the trust and relationships that must exist within the organisation and between the communications team and their colleagues. Some of the outputs from this became stand out moments from coverage of the pandemic – a well-deserved winner.”

Emma Kearney, chief communications officer, said: “I’m incredibly proud of the communications team who worked incredibly hard to make sure our staff were equipped with the information they needed to do their jobs at a time of crisis while at the same time celebrating their monumental efforts. We were privileged to be able to showcase the NHS response to a global pandemic and highlight the incredible work and compassion of our staff. This award recognises the team but also shines a light on the very best of the NHS – our people.”

Here are some of the highlights of the award entry:
• The Hospital documentary was viewed by three million people, scooped the Edinburgh TV Festival award for creativity in crisis and was nominated for a Royal Television Society award and a BAFTA.
• A video clip of our patient Nancy (Hospital episode one) recorded over 770,000 views on social media, while our tweets about the programme earned 1.8m impressions.
• More than 500 covid-related media enquiries/requests made to film in our hospitals. Working with journalists allowed our staff and patients to share their stories, and gave the public an honest portrayal of Covid-19. During the pandemic, the trust has featured in more than 22,000 media stories from outlets including BBC News, ITV News, The Times Saturday Magazine, Daily Mail, New Statesman, National Geographic and the New York Times.
• Patient information shared via social media was accessed by a large audience. Our tweets earned 11.8m impressions compared to 3.3m the previous year (February 2020 – February 2021).