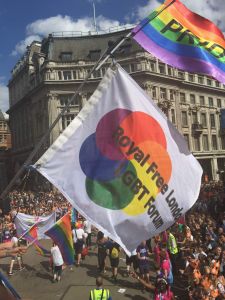 Representatives from the Royal Free London’s lesbian, gay, bisexual and transgender (LGBT) forum took to the streets of London in June to celebrate London Pride.

Pride is the city’s biggest one-day event, with more than one million people typically taking part, and is one of the world’s biggest LGBT celebrations.

Staff from the trust took part in the annual parade led by Stephen Downer, RFL LGBT forum chair. Stephen said: “We had a really great day at London Pride this year. A group of staff took part to represent the trust, with specially made flags bearing our logo.

“We also made good contacts in terms of our own event which is planned at the Royal Free Hospital (RFH) in a few weeks’ time.”

Following on from Pride the RFL LGBT forum have organised a one day event to take place at the RFH on Tuesday 21 July from 10am- 3pm in the Sir William Wells Atrium.

The first LGBT event for the trust will include discussion workshops on topics such as ‘unconscious bias’, led by the trust’s organisational development department, and transgender talks led by local government organisation Camden Trans Community.

A host of external organisations and local community groups will showcase their services and demonstrate their support for the LGBT agenda. Those represented include the Metropolitan Police LGBT liaison team, Stonewall, Unison and Broken Rainbow.

Light refreshments will also be provided and all staff, patients and visitors are welcome to attend.