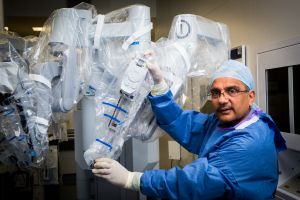 A robot which is used to operate on kidney cancer patients has performed 100 operations since surgeons at the Royal Free Hospital started using it a year ago.

The da Vinci robot allows surgeons to make smaller and more precise incisions, which means that they can perform more complex surgery and in many cases a tumour can be removed and the rest of the kidney preserved.

It also allows surgeons to perform keyhole rather than open surgery, more often. Patients generally recover more quickly after keyhole surgery than they do following open surgery so, because of the robot, more of our patients are well enough to leave hospital sooner.

All the surgeons who operate the £1 million robot are specialists in kidney cancer surgery and undergo specialist training in order to operate the robot.

Michael Aitchison, renal cancer service director, said he was pleased with how the robot has performed.

“This surgical robot has been a huge success,” he said. “We are using it three or four times a week. We can perform more complex surgery and we can perform keyhole surgery more often. Additionally we can perform delicate suturing to repair the remaining kidney. The robot also means more of our patients can keep their kidneys because it allows us to remove just the tumour, rather than removing the whole kidney.”