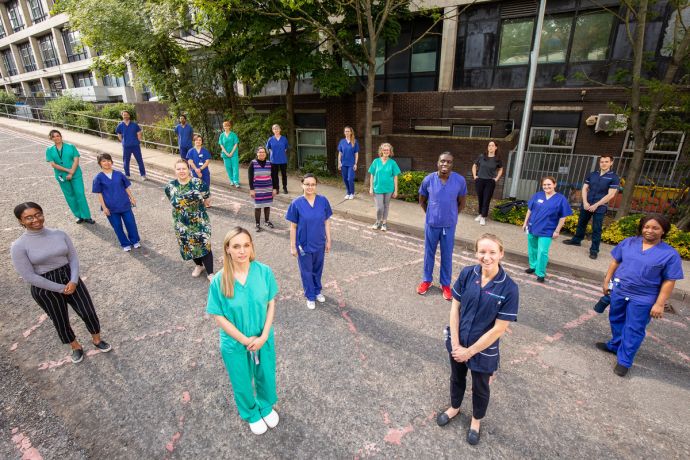 An important study involving staff at the Royal Free Hospital shows a single dose of vaccine boosts protection against coronavirus variants, but only in those who have previously had COVID-19.

The findings, published today in the prestigious journal Science and led by researchers at Imperial College London, Queen Mary University of London and University College London, looked at immune responses in 200 UK healthworkers from the Royal Free Hospital and 531 from St Bartholomew’s Hospital, following their first dose of the Pfizer/BioNTech vaccine.

They found that people who had previously had mild or asymptomatic infection had significantly enhanced protection against the Kent and South Africa variants, after a single dose of the vaccine. In those who had received a single dose of the vaccine, and who had not had a prior COVID-19 infection, the immune response was less strong, potentially leaving them at risk from variants.
The study highlights the importance of getting second doses of the vaccine rolled out to protect the population.

Blood samples were analysed for the presence and levels of immunity against the original strain of COVID-19, as well as the Kent (B.1.1.7) and South Africa (B.1.351) variants of concern. Along with antibodies – the Y-shaped proteins which stick to the virus and help block or neutralize the threat – the researchers also focused on two types of white blood cell: B-cells, which ‘remember’ the virus; and T cells, which help B cell memory and recognise and destroy cells infected with coronavirus.

They found that after a first dose of vaccine, prior infection was associated with a boosted T cell, B cell and neutralizing antibody response, which could provide effective protection against COVID-19, as well as the Kent and South Africa variants.

However, in people without previous COVID-19 infection, a single vaccine dose resulted in lower levels of neutralizing antibodies against COVID-19 and the variants, potentially leaving them vulnerable to infection and highlighting the importance of the second vaccine dose.

The team looked at two variants of concern, however, they think it possible that the findings will apply to other variants in circulation, such as the Brazil (P.1) and India (B.1.617 and B.1.618) variants.

It remains unclear precisely how much protection is offered by T cells. Interestingly, the mutations in the Kent and South Africa variants here resulted in T cell immunity which could be reduced, enhanced or unchanged compared to the original strain, depending on genetic differences between people.

Professor Marianna Fontana, principal investigator for the Royal Free Hospital, said: “This significant study highlights the importance of completing your two doses of the vaccination to provide greater protection. This study is also an incredible example of scientific collaboration between hospitals, universities and departments. Each has provided a valuable contribution.

“I would also like to take this opportunity to thank the volunteers who have taken part. Their commitment to this long term research means we are continuing to make important discoveries about the immune response to COVID-19.”

(Pic: The National Amyloidosis Centre team based at the RFH hosted the study).