Two photographs taken at the Royal Free London have been nominated for a prestigious image award.

An image of a premature baby receiving light therapy at Barnet Hospital and a picture taken inside the Royal Free Hospital’s high level isolation unit (HLIU) were nominated in the Wellcome Image Awards 2016. An overall winner and the winner of the Julie Dorrington Award for outstanding photography in a clinical environment will be announced next week.

The first image shows Francis Hodgson who was 16 days old at the time the picture was taken, being treated with ultra violet light in the Starlight neo-natal unit at Barnet Hospital. Francis, who is now 14 months old, was born 12 weeks premature and weighed just 2lbs 2oz at birth. 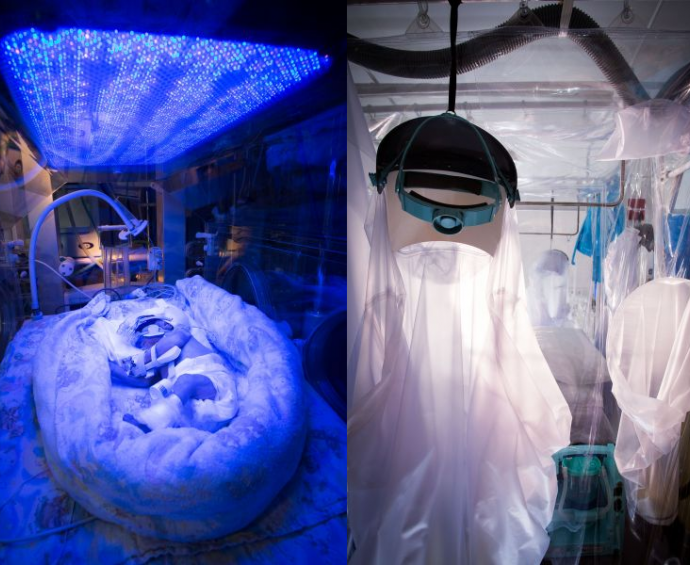 Francis’s mum Angela Brightly, from Enfield Lock, said: “He has come such a long way since then and I am happy with how he is developing. He still has some problems with his lungs, but he is so much better than he was then.”

The second image is taken from inside the HLIU, showing the protective equipment used by staff treating patients with dangerous infectious diseases. Three patients with Ebola have been treated in the unit in the past 18 months.

The HLIU is run by a dedicated team of doctors, nurses and laboratory staff from the Royal Free London infectious diseases service. It was set up at the Royal Free Hospital in 2008 and has since looked after several cases of viral haemorrhagic fever.

Access to the unit is restricted to the team of specially trained medical staff. The HLIU is designed to ensure our medical staff can safely treat a patient with a dangerous infectious disease. A specially-designed tent with controlled ventilation is set up around the patient’s bed and allows the staff to provide clinical care while containing the infection.

The photos were both taken by David Bishop, a photographer with UCL Health Creatives.