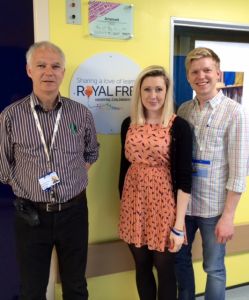 Five students at the Royal Free Hospital Children’s School took part in a BBC project which saw them record a news report, which was broadcast on Radio 4, about mental health provision for young people.

The students were taking part in a project called BBC News School Report, which gives pupils aged 11 to 16 the chance to produce a news report to be broadcast to a real audience.

After reading a newspaper report on adolescent mental health, the students decided that would be an interesting subject-matter for their radio report. They worked closely with a mentor from the BBC, Sarika Unadkat, and a producer, Zoe Millett, who gave them technical advice as well as tips on what to include in the recording.

Two representatives from the charity Young Minds, as well as mental health professionals, were interviewed for the report.

The piece was broadcast last month on Radio 4’s World At One programme, with Martha Kearney.

Melissa Johns, learning support assistant at the Royal Free Hospital Children’s School, said: “The pupils took real ownership of the project and gained a genuine knowledge and understanding of the various roles involved in producing a convincing news report.

“The BBC said they were really happy with the piece and wanted to broadcast it on the World At One.

“The pupils should be really proud of themselves, it’s a real achievement. We all listened to the programme on Radio 4 and the students were all thrilled to hear themselves.”

The Royal Free Hospital Children's School offers high-quality education to all children aged five to 16 who are in-patients at the hospital. The school also provide places for a limited number of children who are not in-patients but who are receiving support from medical or mental health services and may benefit from attending our school on a daily basis.