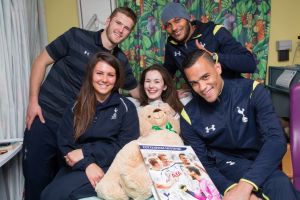 Four Tottenham Hotspur stars came to Barnet Hospital on Tuesday to give an early Christmas present to patients in the children and neonatal wards.

Spurs captain Younes Kaboul was joined by teammates Eric Dier and Michel Vorm, and Tottenham Ladies’ Leanne Mabey at Barnet Hospital where they handed out gifts, signed autographs and posed for selfies with patients, families and even some staff on the Galaxy children’s ward and the Starlight neonatal ward.

Lifelong Spurs fan Charlotte Cummings (pictured right), who also played for the club’s under 9 and under 10 squads, had been meeting with her medical team when the players arrived, and almost had to make do with a photo of 6ft2in Younes Kaboul lying in her hospital bed next to a giant Teddy bear.

But thankfully the 15-year-old arrived back in the closing seconds of the players’ visit, just in time for a last-minute photo.

She said: “It was such an unexpected surprise to see them here but it was really nice.

“I think it is a really good thing to do. It would make anyone feel better, even if you’re not a Spurs fan.” 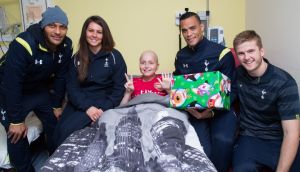 Arsenal fan Harry Flitterman (pictured left) was happy to see the players and pose for a photo, although he couldn’t resist the urge to hold up five and two fingers – a gentle reminder of the Gunners’ back-to-back 5-2 victories over Spurs in 2012.

During their visit the Tottenham players spent hours talking to patients and their families and were overwhelmed by the reception they received.

Eric Dier said: "This is my first time visiting the local hospitals around Christmas time and it was great to meet the families and kids. Some of them are having a really tough time so it was nice to be able to come here and put smiles on their faces."

Galaxy ward play specialist Jill De Graag said: “The players were really good fun and they really made the effort to speak to every one of the patients.

“I think the patients absolutely loved it – even the ones who support Arsenal. One boy had been so down and it was just lovely to see him smile. His face just changed when they arrived.

“It’s brilliant that they do this. It really lifts the spirits in the ward.”

For more photos from the visit, please see the album in our photo gallery: Spurs players visit Barnet Hospital.