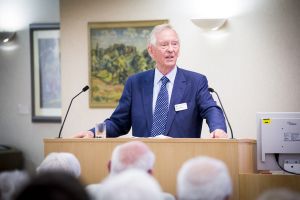 Trust members, patients and the public were invited to the annual members’ meeting at the Royal Free Hospital on Wednesday evening.

The meeting was a chance for members to find out about the improvements that have been made to the Royal Free London over the past year and an opportunity to quiz the executive team and the governors on any aspect of care provided by the trust.

Professor Stephen Powis, the trust medical director, spoke about some of the successes and challenges the trust has faced over the past year, including the acquisition of Barnet and Chase Farm hospitals, the successful treatment of three Ebola patients in the high level isolation unit and the redevelopment of Chase Farm Hospital.

Professor Powis said: “Although we planned well in advance for the acquisition and many of the other challenges we faced in the past year, the Ebola outbreak in West Africa was unexpected. Many of our staff worked around the clock to care for the three Ebola patients who were treated at the Royal Free Hospital to ensure that they were given the best chance of a recovery.

“We’ve also made a number of improvements to care at all of our hospitals. We have created a new ward base for elderly care at Barnet Hospital and at Chase Farm we’ve opened a four-bed high dependency unit and moved the blood test unit to an improved patient environment.”

Dominic Dodd, chairman of the trust, also led a question and answer session during which members of the executive team responded to audience queries on topics including the care we provide to patients, the food we serve to in-patients and waiting times.