Staff at Barnet Hospital and Chase Farm Hospital got into the festive spirit on Wednesday to celebrate the launch of their new devoted hospital charities.

Volunteers kitted out in the charities' official purple tops handed purple balloons, purple cupcakes and wristbands to staff and visitors. 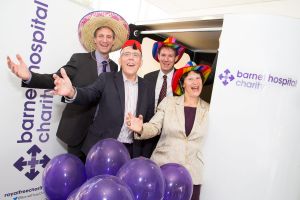 Those passing through the two hospitals also had the chance to pose for fun pictures with a variety of purple props and costumes.

The move saw the RFL’s Royal Free Charity expand to create two new arms, the Barnet Hospital Charity and Chase Farm Charity, which will each fundraise specifically for their own hospital.

The charity will provide its patients with the little touches and also fund bigger projects, both of which have a huge impact on our patients.

They will improve patient experience by providing hospital volunteers to help people find their way around, slippers for elderly patients and care packs for patients who arrive with nothing.

They will also support major projects and buy specialist equipment that will make a real difference to patient care.

Last year the charity raised more than £15 million for the Royal Free London. 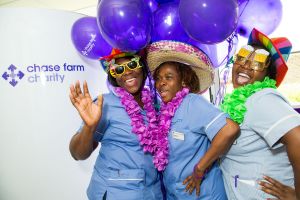 Chris said: “This is a really great moment for us. The services we provide at Barnet Hospital and Chase Farm Hospital will be at least as good if not better than the ones we provide at the Royal Free Hospital.

“Already you can walk around the hospitals and see our volunteers and our complementary therapists giving massages. We know that we can do more, but we can only do that with the support of the local people and the people at this hospital.”

Dominic pointed out that both Chase Farm Hospital and the Royal Free Hospital began life as charitable endeavours, before the creation of the NHS.

He said: “Charity has had a huge part to play in the history of our organisation and it is playing a huge part now. Often it is the little things like having slippers to give to older people who arrive without them or programmes that benefit our staff. But also the big contributions that can change the organisation.

“Charity and charitable giving is going to be a huge part of what we want to do in future.”

If you want to get involved in fundraising for your local hospital, you can view the charity’s planned events at www.royalfreecharity.org/events.

If you’re keen to organise something of your own we would love to hear from you, please contact Alison Kira for more information.

You can donate to the charity by:

For more information call our head office at the Royal Free Hospital on 020 7472 6677 or email rf.fundraising@nhs.net.

We provide the little touches and big differences, including volunteer meet and greeters to help people find their way around, slippers for elderly patients and care packs for patients who may have arrived with nothing with them.

We also support the big projects that make a difference, from specialist medical equipment to  art work that brightens up hospital corridors.