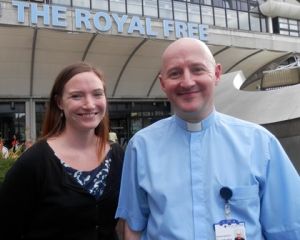 Two members of staff at the Royal Free London have been named lesbian, gay, bisexual and transgender (LGBT) role models within the NHS at a prestigious awards show.

Reverend David Rushton, lead chaplain, and Kerry Wykes, senior staff nurse in A&E, were both named at an award show run by the Health Service Journal (HSJ) celebrating 24 LGBT role models from across the whole NHS.

The role models were selected from a group of 60 nominees by a panel of judges which included James Taylor, head of policy at LGBT rights charity Stonewall and Alastair McLellan, editor of the HSJ.

Those on the list were noted for their work to promote the inclusion of and support for the LGBT community, helping to break down barriers and effecting change through personal example, leadership or day to day excellence.

The HSJ held a reception at the Century Club in Soho on Wednesday night to celebrate the success of those nominated and those who made the final 24.

On selecting Kerry for the award, the judges said: “Her work on domestic abuse in same-sex relationships has been pioneering and deserves recognition.”

While they said David is “someone who is prepared to stick his head over the parapet, but always in a very modest way.”

Kerry said: "I was surprised and delighted to be nominated as an LGBT role model - I have always felt so warmly accepted by all staff at the Royal Free London. I would particularly like to thank my awesome colleagues in A&E.

“I will certainly continue to promote awareness and equality in LGBT health and healthcare, particularly with regards to domestic abuse."

David added: “I am really surprised but very happy to have been nominated and to have made the list. This is saying to others that being gay is ok and that it is normal. I think there is an atmosphere in this trust set by the management at the top of the organisation, which allows people to be open about who they are.

“I am looking forward to continuing working with patients and staff in all areas where people might face discrimination.”