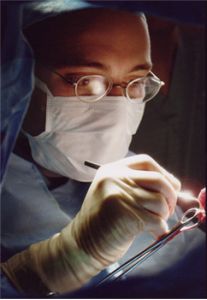 A Royal Free Hospital plastic surgeon who successfully reconstructed a teacher’s ear using cartilage taken from his rib has been featured on a Channel 5 documentary.

Thursday’s episode of Botched Up Bodies featured Paul Jenkins, 51, who lost most of his left ear in a bicycle accident. Soon after the accident Paul underwent ear reconstruction surgery, which involved harvesting rib cartilage before carving it into the shape of an ear and inserting it under the skin.

However, Paul was not happy with the result.

“What I ended up with wasn’t quite what I was expecting,” he said. “To be honest it is not pretty to look at and I need to keep it covered up.”

After years of hiding the misshapen ear he was referred to Royal Free Hospital surgeon Walid Sabbagh, one of the UK’s leading ear reconstruction surgeons, who identified that the rib cartilage used to shape the ear was too thick and lacked definition.

He said: “In my opinion the surgeon who performed the surgery was not fully specialised in ear reconstruction. Ear reconstruction with rib cartilage is one of the most complex operations in plastic surgery.

“The ear he had was the wrong size and the wrong shape. Overall it didn’t look like an ear.” 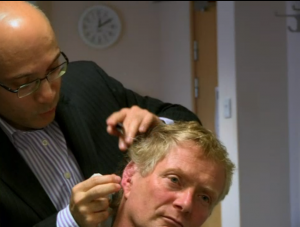 Paul opted to let Mr Sabbagh start the reconstruction process from the beginning, harvesting and carving a new piece of rib cartilage and substituting it for the previously reconstructed ear.

Despite the increased difficulty of performing surgery twice on the same site, the operation was a success and both Paul and Mr Sabbagh said they were very pleased with the results.

Mr Sabbagh said: “I am very, very happy. It has gone really well. The ear looks very good. It was a very successful operation.”

Paul added: “It’s all gone really really well. I have got an ear that actually looks like an ear, so I am very pleased with that.”

Botched Up Bodies follows some of the country’s top surgeons as they go about repairing the work of other clinicians and can be seen every Thursday at 10pm on Channel 5.