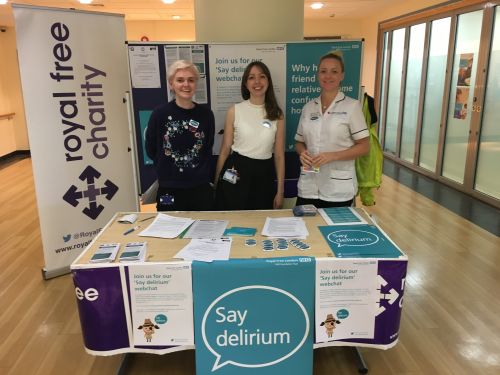 The Royal Free London marked World Delirium Day by urging staff, patients and the public to talk openly about the condition.

Delirium is a word used to describe a change in brain function which makes a person become suddenly confused. The person may appear more agitated or emotional and their memory may be worse than usual and their speech may seem muddled. They can often seem frightened or angry and may experience hallucinations or hold paranoid or persecutory beliefs.

Dr Jo Hardwick, perioperative consultant at the Royal Free London, led the trust’s #SayDelirium campaign, which saw educational videos about delirium and how we treat it go out on social media throughout the week. A stall was held in the main entrance of the Royal Free Hospital on Wednesday 15 March, to mark World Delirium Day, where staff, visitors and patients were encouraged to learn more about delirium and wear a ‘say delirium’ badge.

Dr Hardwick said: “People who develop delirium may need to stay longer in hospital or in critical care. They are also more likely to experience incidents of dementia, have hospital-acquired complications, such as falls and pressure sores.

“This is why our campaign is so important, as delirium can be prevented and treated very effectively if dealt with urgently. We want staff to understand the importance of using a proper screening test for the condition and also alert carers to the signs to look out for.” 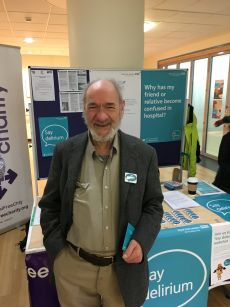 Thomas Merson, a patient at the Royal Free Hospital, said: “It is interesting to hear this information about delirium, as most people would just think that the person is confused and not treat it as a condition.

“If more people know about this condition, then more doctors will be able to help the patients suffering from it.”