A Royal Free Hospital nurse who is also a member of the army reserves has spoken about her experience of treating patients with Ebola in Sierra Leone.

The Royal Free London was recognised by the British Army for its work supporting defence personnel. 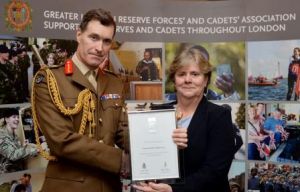 The trust was among 18 organisations to receive a Silver Award for helping staff who are in the army reserves manage their reserve and civilian careers.

A&E nurse Sally Webster said was grateful that the Royal Free London had allowed her to volunteer in Sierra Leone, where she treated patients with Ebola.

Sally said: “In January I was offered a job with the ED department at the Royal Free Hospital but then the chance to go to Sierra Leone to care for people with Ebola came up. The Royal Free said I could defer my start date until later in the year.”

Before travelling to Sierra Leone Sally has a month of training.

“Our job was to care for the healthcare workers who had become ill. When I was first there, there were around 20 new infections every day, then towards the end, the numbers were starting to drop. The work there has given me confidence – if I can carry out procedures when I am wearing two layers of protective clothing and two pairs of gloves, then I can do anything.” 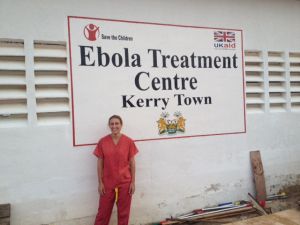 As a reservist nurse, Sally has to train regularly with the army, and she has to complete basic weapon training. Every year she must complete a minimum of 29 days training, although she will often take part in training weekends.

“The trust has really helped and supported me. For example, reservist staff are allowed to take an additional week off for training,” added Sally.

Susan Lyons, divisional director of operations for transplantation and specialist services, who accepted the award from the MOD, said: “I’m thrilled the trust’s work in supporting defence personnel has been recognised. This is one example of the way in which the trust aims to support our staff, and help them provide the best care for patients.”