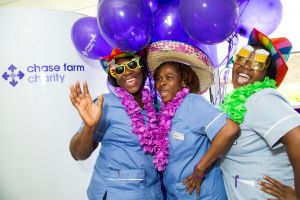 Two charities dedicated to supporting patients at Barnet Hospital and Chase Farm Hospital have this month been named as their local Sainsbury’s charity of the year.

The Friends of Barnet Hospital, which provides funding for equipment, research and other services at the hospital, won an online public vote to become New Barnet Sainsbury’s partner charity for the next 12 months.

In Enfield, the recently-formed Chase Farm Charity topped the polls to become the nominated charity of the Sainsbury’s superstore in Crown Road.

The nominations could net the charities between £20,000 and £50,000, with each supermarket committing to collecting donations and helping to organise fundraising events throughout the year.

Launched in 1952, the Friends of Barnet Hospital has raised millions of pounds for patients and staff via donations and the hospital shop. It also manages the Barnet Hospital Radio station.

Bob Henderson, the charity’s vice-chairman, said: “It really is great news for the Friends. Being chosen as Sainsbury’s local charity of the year is an acknowledgement by the local community of the huge contribution that we have made over the last 60 years. We raise funds for projects that ultimately make life a bit better for patients coming into Barnet Hospital.”

Alison Kira, development manager for Chase Farm Charity, said: “I want to say a huge thank you for everyone’s support and votes. This has the potential to bring in a significant amount of funding for Chase Farm Hospital over the next year, as well as gaining local support and raising awareness of the charity.”

Image: Celebrations at the launch of Chase Farm Charity

The Royal Free Charity provides the little touches and big differences, including volunteer meet and greeters to help people find their way around, slippers for elderly patients and care packs for patients who may have arrived with nothing with them.

We also support the big projects that make a difference, from specialist medical equipment to art work that brightens up hospital corridors.