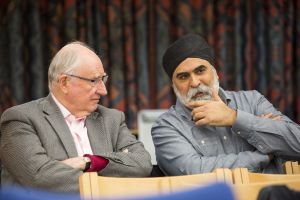 Parkinson's is a progressive neurological condition, which means that symptoms can often appear slowly and over a long time. People with Parkinson's don't have enough of a chemical called dopamine because some nerve cells in their brain have been lost. Without dopamine people can find their movements become slower so it takes longer to do things. Most people who develop Parkinson’s are aged 50 or over, but younger people can get it too. In the UK it is estimated that one person in every 500 has Parkinson’s, that’s about 127,000 people. There is currently no cure for Parkinson’s and we don’t yet know why people get the condition. However much research is taking place worldwide looking at all avenues of potential causes, which is helping us understand Parkinson’s better and better. At the Royal Free we are engaged in and leading a series of research studies that are looking at many aspects of the condition.

The main symptoms of Parkinson’s could be tremor, rigidity, slowness of movement or a combination of these. They are generally known as 'motor' symptoms, being to do with movement. As well as affecting movement, people with Parkinson’s may find that other issues, such as tiredness, pain, depression and constipation, can have an impact on their day to day lives. Different people can experience the condition differently and the symptoms someone has and how quickly the condition develops will differ from one person to the next.

Parkinson's is a clinical diagnosis. The  diagnosis is usually made by a consultant with specialist expertise. Our specialists will examine and assess for any physical signs of Parkinson's and take a detailed history of the symptoms. There are national and international guidelines for the diagnosis of Parkinson's which health professionals follow and which were drawn up by experts including one of our own consultants (NICE Guideline, England, Wales, Northern Ireland)

Parkinsonism is a term used to describe symptoms or signs that are found in Parkinson’s, but also in other conditions that cause slowness of movement, stiffness and tremor. Most people with parkinsonism have Parkinson’s disease. Other less common forms of parkinsonism include multiple system atrophy (MSA), progressive supranuclear palsy (PSP), drug-induced parkinsonism and vascular parkinsonism. You can find out more about symptoms and diagnosing Parkinson’s from the Parkinson’s UK website information sheet.

Drug treatment is the main method used to control symptoms caused by the loss of dopamine. The main aim of these drugs is to increase the level of dopamine that reaches the brain and stimulate the parts of the brain where the dopamine works. There are many different drugs prescribed for Parkinson’s and research into treatments is improving the options all the time. Drugs are reviewed over time to make sure the best combination works well. Therapy such as physiotherapy, speech and language therapy, occupational therapy and diet can help in dealing with daily life. More information on treatments and therapies can be found on the Parkinson's UK website.

What our service aims to offer

Our service offers diagnostic assessment from a team of neurologists specialising in Parkinson’s and other movement disorders, which is supported by a Parkinson’s disease specialist nurse. This allows for clinical monitoring and medication adjustments and provides a continuous point of contact for information about clinical matters and other issues that concern people with Parkinson’s and their carers.

This service aims to enhance the quality of life for those diagnosed with Parkinson’s and their families by providing support, advice and education about Parkinson’s disease.