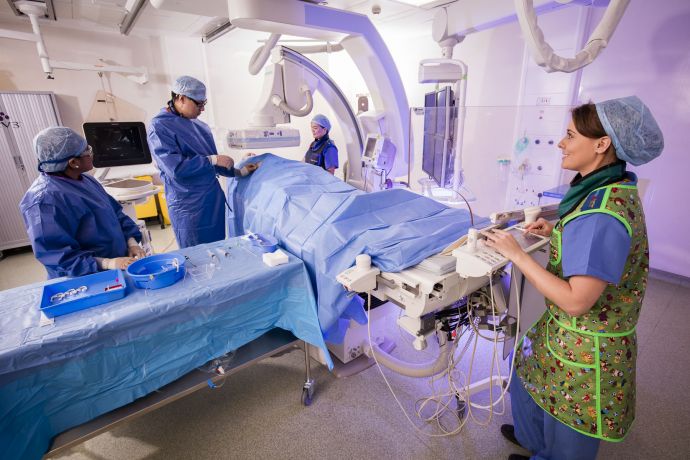 Diseases of the arteries

Narrowing of arteries
Narrowing of the arteries leads to restricted blood flow. This can affect the organs or the limbs (when it is known as peripheral vascular disease). Interventional radiologists (IR) treat this by using balloons to stretch the vessel (balloon angioplasty, PTA) and sometimes metal tubes called stents to hold them open. Sometimes arteries or bypass grafts block suddenly with a rapid loss of blood supply to the limb. Unless the blood supply is restored this can lead to amputation. Interventional radiologists can perform thrombolysis using clot busting drugs delivered directly into the artery.

Expanded arteries (aneurysms)
Aneurysms are weak sections of artery at risk of rupture and bleeding. IRs treat these by relining the vessel with a tube called a stent graft which prevents blood flowing into the fragile aneurysm.

Bleeding (haemorrhage)
Bleeding is the most common emergency treated by an IR. Haemorrhage can come from almost anywhere, including from the gut, secondary to major injury or following birth. Bleeding can often permanently be stopped by blocking the vessel (embolisation), relining the vessel with a stent graft or by blowing up a balloon in the vessel to stop the bleeding until emergency surgery can be performed. Interventional radiology is also used to prevent bleeding during certain sorts of surgery, eg during caesarean section in patients with a high risk of bleeding from an abnormal placenta (post partum haemorrhage).

Diseases of the veins

Dilated veins (varicose veins)
These most commonly occur in the legs but can occur in the pelvis or scrotum. They can be treated by blocking the vein (embolisation) using irritant drugs or coils.

Blocked veins
Blocked veins can occur in the context of a blood clot in the veins (venous thrombosis or DVT) which is sometimes treated by the injection of blood clot dissolving medicines (thrombolysis) through a small catheter passed into the vein. Some patients develop blood clots as a result of a narrowing in a vein, when the clot has been broken down using balloons and stents. Sometimes tumours in the chest will compress a vein leading to facial swelling, headache and other symptoms which can usually be relieved with a stent.